Continuing its longtime partnership with NASCAR legend Kenny Schrader, Federated will sponsor racing’s hardest working man and his race teams during the 2013 season in a variety of series, including the NASCAR Sprint Cup Series. 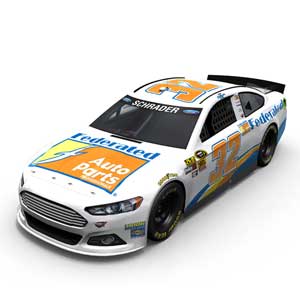 “Kenny Schrader has become synonymous with Federated Auto Parts and we are honored to partner with him again this year,” said J.R. Bishop, director of motorsports and event marketing for Federated. “Federated will sponsor Schrader Racing in a variety of events this year, from Sprint Cup and ARCA to the NASCAR Truck Series and various dirt track events. Kenny is a great ambassador for Federated, and our members and their customers really enjoy hosting him at their local events.”

Federated will be the primary sponsor of Schrader and the FAS Lane Racing team in eight NASCAR Sprint Cup Series races, including the Federated Auto Parts 400 on Sept. 7 at the Richmond International Raceway.  In addition, Federated will sponsor Schrader in two NASCAR Truck series races, four ARCA races and over 50 dirt track events coast-to-coast. Schrader, who serves as an official spokesperson for Federated Car Care, will also participate in hospitality events hosted by Federated members at select tracks.

In August, Schrader will host the always popular “Get Dirty with Kenny” Federated Car Care promotion at the Federated Auto Parts I-55 Raceway in Pevely, Mo., but with a new wrinkle this year.  Kevin Byrd and Willie B., hosts of the Federated-sponsored SPEED show “Two Guys Garage” will join Schrader and the winning Federated Car Care Center members for a day of racing. Schrader and the Two Guys will also tape a special episode of “Two Guys Garage” during the annual dirt track racing extravaganza.