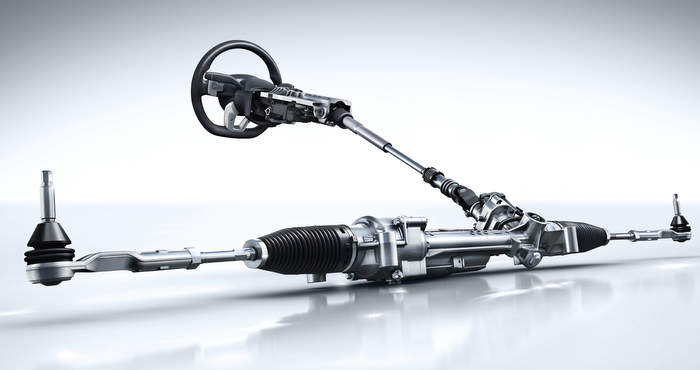 Electric power steering is fast becoming a standard feature on new vehicles, but it’s not an emerging technology, as it’s been in the field for the better part of two decades.

One of the first domestic applications that almost made it to production was the Pontiac Fiero. The 1989 model was going to have an electric-driven pump that resided in the front and powered a conventional power steering rack and pinion — a technology that was eventually used by Porsche.

The evolution of this system has seen the hydraulic portion be replaced by magnets and armatures. The other evolution has been in the area of sensors. Some of the current torque sensors can even detect if the driver has removed his or her hands from the steering wheel.
The electric motor has now evolved to the point where it can take control. More powerful motors allow the vehicle to park itself and even nudge a vehicle back into its lane if the system detects a drift due to a driver’s text message or radio station change.

When a steering wheel is turned, a steering sensor detects its position and rate of rotation. This information, along with input from a steering torque sensor mounted on the steering shaft, is fed to the power steering control module. Other inputs, such as vehicle speed and inputs from the traction control or stability control systems, are factored in to determine how much steering assist is required. 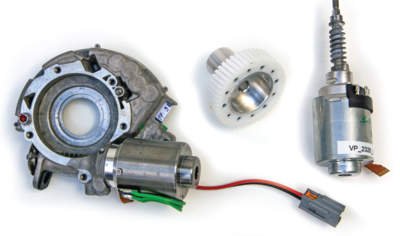 The control module then commands the motor to rotate a certain amount, and a sensor on the motor provides feedback to the control module so it can monitor the motor’s position. On older systems, if a sensor or other component in the steering system fails or starts producing out-of-range data, the self-diagnostics should detect the fault, set a code and more than likely disable the power-assist. A warning light will illuminate to alert the driver, and the driver will notice a significant increase in steering effort when turning the vehicle. The goal of the system is to prevent overheating and damaging the electric motor.

The GM electric power steering system only had four modes of operation. In a normal mode, the steering responds to driver inputs measured with a steering angle sensor and torque sensor, and provides steering assist that is required for the vehicle’s speed.

In return mode, the system assists steering return after completing a turn. Information from the steering position sensor prevents the system from “overshooting” the center position.

In dampener mode, the system acts like a hydraulic dampener to prevent kick back and bump steer. It uses speed and steering wheel position information to determine the amount of dampening. Sometimes the steering would enter this mode while the vehicle was parked with the engine on and the driver might notice small movements in the wheel.

The most important mode is protection mode. This mode detects and estimates excessive amounts or long periods of current draw that could burn out the motor. This can occur if the steering wheel is held at a locked position for a long time, or if the information from the steering angle sensor is erroneous. In some cases, if the sensor has an incorrect steering angle, a high road crown can cause the system to overheat.

The system had rudimentary diagnostics and a malfunction indicator light in the dash. It performs a self-check when the vehicle starts to confirm signals and communication with the ABS and ECM module, and it uses inputs like steering angle, applied torque and steering wheel speed and vehicle speed to decide the amount of assist.

These early systems like to play it safe. Automakers that provided the warranties on these systems wanted to eliminate the chance that a damaged or poorly calibrated sensor could cause the motor to work harder than normal and burn out. At the earliest sign of trouble, the system would shut down and warn the driver with a dash light, hoping the vehicle would be serviced and a class-action lawsuit would be avoided.

This safe mode creates a diagnostic challenge for the technician because the vehicle will likely be brought to your shop in this shutdown condition, which makes observing the root of the problem difficult until more tests can be performed.

More advanced electric power systems have been on the market for a decade, and their complexity increases every year. These systems are more powerful and use more information from different systems to add new levels of safety, steering feel and driver convenience.

What really sets more advanced systems apart from previous systems is the resolution of the torque and steering position sensors. The sensors can measure smaller changes in the driver inputs when compared to sensors on some 2005-‘11 GM systems.

There are three different types of electronic torque sensors, and they are classified as contact and non-contact types. A non-contact sensor uses a magnetic rotor with alternating pole pieces and is attached to the torsion bar. Hall-type sensors monitor the twist of the torsion bar by measuring the change in magnetic flux generated by its position to the vanes located on the sensor stator rings.

When the rotor moves, a change in magnetic flux will produce a signal to an analog-sensing integrated circuit that will process the signal and send the information to the controller’s assist algorithm.

With more accurate data and faster modules, the electric motor on the rack is doing a lot more than just assisting the driver. With just a few more sensors and new software, the car of the future is being made possible by electric power steering.

Can’t parallel park? Mount some proximity sensors in the bumpers that can be used for a parking assist system that can parallel park a vehicle. All the driver has to do is operate the gas and brake.

Add front and rear cameras and proximity sensors to the side-view mirrors and you have a lane departure system that can tell when the vehicle is drifting out of its lane. Mild systems can shake the wheel like they are hitting an imaginary rumble strip; more aggressive systems can take action and steer the vehicle back into the lane. These systems have software that can determine if a drift is due to a distraction like a phone call or a legitimate lane change. NHTSA is looking at mandating these systems on new vehicles for the 2018 model year.

Combining adaptive cruise and electric power steering can almost create the self-driving car, and some automakers are taking this first step at slow speeds. Audi, Mercedes Benz and Volvo are introducing a feature that allows the driver to be completely hands off during a traffic jam. The driver can sit and relax while the system takes over.

With more information and sensors, diagnostics have been made easier compared to older systems. The right scan tool can look at many data PIDs and engage in bidirectional tests. Also, the scan tool is essential to calibrating sensors and reflashing replacement modules.

New steering systems work with the ABS/ESC systems to make small corrections to the steering to keep the vehicle pointed straight. These types of conditions can occur if a vehicle is braking on surfaces with uneven levels of traction. The BMW system, for example, will make tiny corrections to the wheel angle (typically not noticed by the driver) to make the correction with the ABS modulator more effective. These system integrations would not be possible if the yaw and steering angle sensors were not accurate.

Adaptive or active steering changes the ratio between the driver’s actions at the steering wheel and at the rack. In traditional vehicles, this is a fixed steering ratio. With this new technology, the steering ratio continually changes with vehicle speed, optimizing the steering response in all conditions.

At lower speeds, such as when pulling into a parking space or maneuvering in tight quarters, the system makes the vehicle more agile and easier to turn, as it dials more steering into the road wheel. Each low-speed maneuver requires less turning of the steering wheel. At highway speeds, the system further optimizes steering response, enabling the vehicle to react more smoothly and precisely to driver input. Adaptive steering can help the driver feel more comfortable and can make any drive more enjoyable.

BMW’s system puts an electronically controlled planetary gear between the rack and motor. The system can be locked if a problem is detected. Audi and Lexus place a gear reduction box between the steering wheel and rack with a locking mechanism included as a fail-safe.
Ford’s new variable ratio system uses a precision-controlled actuator placed inside the steering wheel, and requires no change to a vehicle’s traditional steering system. The electric motor actuator and gearing system essentially add to or subtract from a driver’s steering inputs.

Servicing these systems will require training and enhanced scan tools, and diagnosing these systems will also require an advance understanding of CAN buses. But the most important step you can take today is to start a program at your shop to address the calibration of steering position sensors after steering system service or an alignment.