Don’t Back Down When Recommending Ride Control 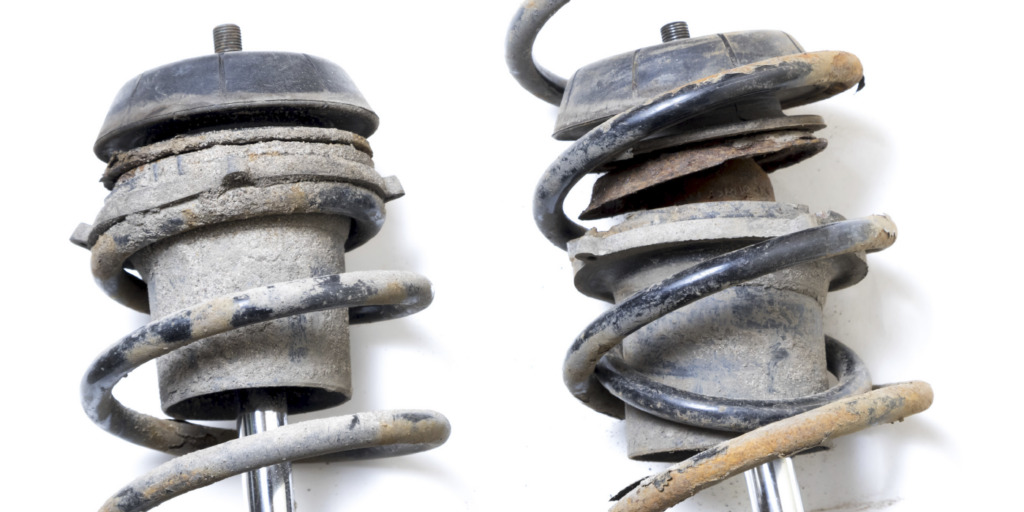 I get “flop sweats” when I panic. One of my worst cases was when working the front counter at a tire dealer. We had just inspected a Ford Taurus,  with a broken passenger side spring and about 75,000 miles on the clock. The customer dropped off the car in the morning complaining of a knocking noise and notchy steering.

I was on the phone with the customer at 9:30, getting approval on the recommended work. The estimate I wrote was for four struts, two springs and front upper strut mounts. I spent extra time finding parts, looking up labor times and calculating the out the door price.

Then the customer said the phrase, “Is there a less expensive option?” Then the flop sweats started. It got worse after he asked, “Can I get away with just replacing the fronts?”

I quickly pulled out my calculator and rewrote the estimate on the fly for just the front struts, springs and upper mounts. After giving him the price, he asked if it would be half that price if he did only one side. My manager could see the sweat on my face and tapped me on the shoulder. “Tell the customer you will call him back in 10 minutes with an accurate estimate because you need to talk to the technician.”

He told me that the only way the shop would do the job was to do it the right way. He explained that if we did just front struts, it would make the vehicle unstable. Only replacing one strut would make the car unsafe and impossible to align. He said the customer would be unsatisfied if we did not do both front and rear struts. He might complain about a steering pull tomorrow, uneven tire wear in a month or that he could not control the vehicle.

Looking back, I was more concerned about the customer walking out of the shop without buying anything than doing the job the right way to make the vehicle functional and safe. I was looking for approval for my ego and not approval for a sound repair.

Shocks, struts and springs do not operate independently. The condition of one corner of the suspension affects all the corners of the vehicle when the driving straight or cornering. At low speeds, it might not be as noticeable, but it still happens. At higher speeds and cornering forces, the inability to control the movement of the suspension and body in one corner can change the contact patch for all the corners.

During a panic situation, an unbalanced suspension with worn ride control can alter the contact patch to the point where the vehicle oversteers, understeers or can’t stop.

The computer does not assign a value to the condition of the contact patch and there are no parameters (PIDs) in the programming for most systems. The corrections and the effectiveness are measured by the sensors in a high-speed feedback loop.

These stability control sensors are essentially blind to the condition to the state of the ride control and suspension. The software and sensors can’t diagnose a strut that has lost its gas charge or if a spring is weak. It just sees the results in data coming from the sensors. To the algorithms in the software, it could be a patch of ice or an over-loaded car. But the reality is that it could be a worn out strut and a spring with a missing coil.

Basically, if the suspension is not up to snuff the correction by the system will take longer. This results in longer stopping distances or in some cases the vehicle ending up on its roof.

For example, the most basic stability and ABS correction is a panic stop in a straight line. When the driver mashes the brake pedal, weight transfers to the front tires, loads the front suspension and causes the springs to compress. How much the springs compress is influenced directly by the condition of the shocks or struts. When the springs compress, the contact patch of the tires changes due to the weight and geometry of the suspension.

The rear suspension is even more interesting. When the weight loads the front tires, the rear spring expands, which makes the contact patch of the rear tire smaller. If the shock or strut is unable to control the rebound of the spring, additional weight is transferred to the front, which nosedives even more.

Applied to the front counter at your shop, it means that you should never sell just one strut, shock or spring. Also, you should be very careful selling just front or rear ride control units. This approach might get the customer back on the road but not in a safe vehicle.

So, what did the customer do with his Taurus? After calming down and wiping the sweat from my brow, I explained why we recommended replacing all four struts. He finally understood and decided to replace all four struts and both front springs.

Stand by your recommendations. You are not doing your customers any favors by doing a less expensive repair.