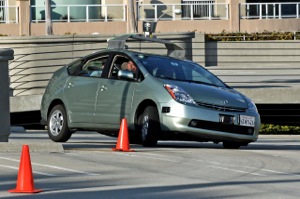 The auto industry won’t be producing vehicles in the near future that encompass the options of the flying “Spinner” cars portrayed in 1982’s Blade Runner, however, the reality is that we will soon be seeing something more like the “Johnny Cabs” that hailed from the 1990’s film Total Recall.

There is a lot of speculation on how these driverless vehicles will impact the service industry.

For one thing, it’s going to take technicians even more skilled in computers and electronics to service these vehicle systems.

Bob Lutz, former GM vice chairman and idea man behind the Chevy Volt, said recently that he expects mass-produced driverless vehicles on the roads within 20 years and that the technology to operate such vehicles is already available.

Together, these advancements are designed to keep the vehicle in its lane and at a safe distance from the car in front of it. The car will also apply the brakes to avoid a collision, even when a car driving 30 miles slower suddenly pulls in front of it.

Lutz thinks this is a great idea, since “cars don’t smoke pot or drink,” and thereby the nation will see a reduction in driver-impaired accidents.

While the expected safety improvements are beneficial, the aftermarket may see more miles per vehicle increase, as the technology will allow more people such as the elderly and those who do not like to drive in
traffic the opportunity for more travel.

Vehicles also could be programmed to arrive at your shop for service or maintenance even without a passenger. Let’s just hope the “smart car” doesn’t ­forget the credit card to pay for the work.