Could COVID-19 Cause 'Cash For Clunkers' Comeback? 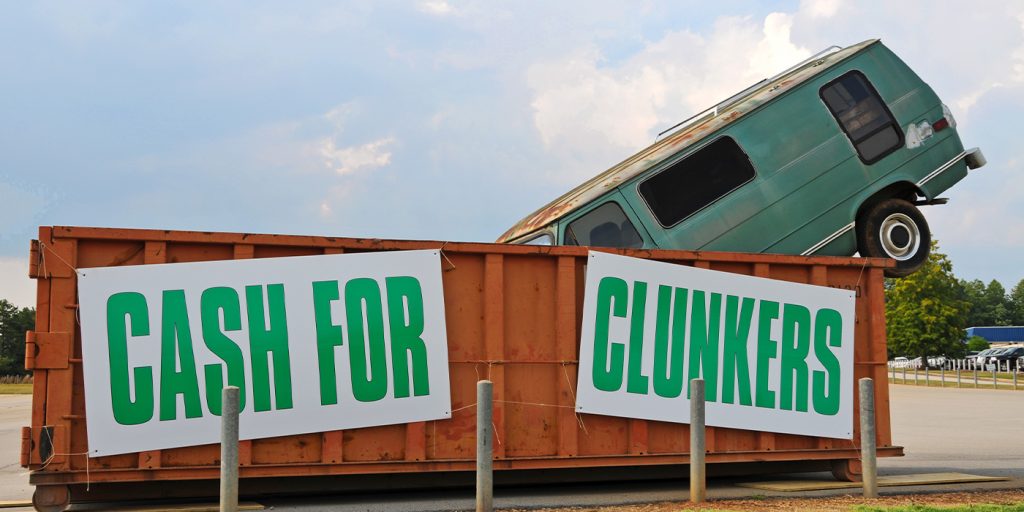 The desire to regain an economic foothold when we’re still stumbling through the confusion of the Coronavirus pandemic is understandable. These are confusing times with no definite end on the horizon and no clear outcome in sight. People are hurting now and the demand and desire to do what’s possible to help is laudable.

But I think bringing back a failed “Cash for Clunkers” program is far from brilliance. I’m sure you’ve heard that the definition of insanity is doing the same thing over and over again, expecting a different result.

The 2009 economic stimulus package that offered between $3,500 and $4,500 to people who traded in an older, polluting “clunker” for a moderately more fuel-efficient new car was intended to help in multiple ways. It was supposed to help the environment by getting polluters off the road and it was supposed to kickstart the U.S. economy during the financial crash of the late ’00s.

“I’m sure you’ve heard that the definition of insanity is doing the same thing expecting a different result.”

Things didn’t work out exactly as intended then and they’re unlikely to do so now. The Government Accountability Office (GAO) and the Brookings Institute point out flaws in the assessment that the program did anything to help the economy overall, instead benefitting automakers alone.

Recently, major automotive aftermarket associations sent a letter to Congressional leaders in opposition of a new “Cash for Clunkers” type program from being included in new stimulus legislation. As a caution against insanity, leaders of several associations said this now about that then:

“What we do know is that this $3 billion program removed approximately 700,000 vehicles from independent automotive repair shops. The program was beneficial to auto manufacturers rather than acting as a stimulus to the entire automotive industry.”

In the letter, Bill Hanvey, president & CEO, Auto Care Association, said “As a result of the economic devastation resulting from the COVID-19 crisis, Congress should focus its efforts on helping the country and more specifically, the entire transportation sector get back on its feet. While the Cash for Clunkers program might benefit the bottom line of the vehicle manufacturers, it fails to deliver effective aid to those that need it most: the small- and medium-sized businesses that repair and maintain vehicles and the Americans who own them.”

Ray Fisher, president & executive director, Automotive Service Association said, “The Cash for Clunkers program had confused results as far as stimulating the economy and improving air quality. What we do know is that the program impacted employment and harmed the bottom line of numerous independent automotive repair facilities and their families across the U.S.”

And Roy Littlefield, Tire Industry Association CEO, said “Rather than focus on removing older, post-warranty vehicles from the roads indiscriminately, Congress should look at enhancing Motor Vehicle Inspection programs in all 50 states. This would remove unsafe vehicles from the nation’s roadways, while maintaining safe older vehicles as a customer base for independent repair shops.”

Industry association protests to Congress went unheard in 2009. Is it insane to hope that sounder thinking will prevail in 2020?