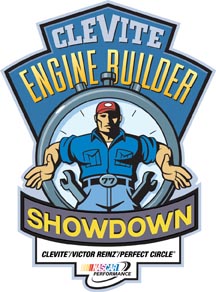 Clevite Engine Parts is gearing up to once again shine the spotlight on NASCAR’s hidden heroes of racing by sponsoring the 2006 Clevite Engine Builder Showdown.

In keeping with previous competitions, 16 of NASCAR’s top engine builders will participate in the first round of the Showdown. The competing engine builders will assemble 357 cubic inch Ford engines – similar in design to those used by NASCAR’s Ford race teams. As with last year, the first round of the Showdown will serve as a qualifying round, with the eight fastest times advancing to Round 2. Engine builders from NASCAR’s top race teams will be vying for the title of Clevite Engine Builder Showdown Champion – and the right to have their name’s immortalized on the Randy Dorton Memorial Trophy.

In addition to last year’s champions Danny Lawrence and Greg Gunnell of Richard Childress Racing and runners-up Mike Maiwald and Shane Parsnow of Hendrick Motorsports (they receive an automatic bid) the field will include the following teams:

Round 1 of the 2006 Clevite Engine Builder Showdown will kick off on Tuesday, May 2 and Wednesday, May 3 at the NASCAR Technical Institute (NTI) in Mooresville, NC. The eight fastest times will receive a cash award of $1,000 and will advance to the second round of competition.

Round 2, also at NTI, occurs Thursday, May 4. The winners of Round 2 will receive cash awards of $1,500 and will proceed to Round 3, which awards $2,000 to each winning engine builder.

Round 3 takes place Monday, May 22, and the Final Round is Tuesday, May 23. The Final Round’s runner-up will receive a cash award of $5,000. The champion receives a cash award of $20,000, their place on the perennial Randy Dorton Memorial Trophy and will be dubbed the 2006 Clevite Engine Builder Showdown Champion.

Race fans and engine building enthusiasts can check the results of the various rounds by going to the Clevite Engine Parts website at www.engineparts.com. For the last three years, Showdown fans have also been able to view the Showdown on the SPEED Channel.

Since 1990, Clevite Engine Parts has presented the Clevite Engine Builder Challenge Series in which NASCAR’s top engine builders compete to see who can assemble and run an engine the fastest. In 2000, the series developed into a structured and tiered competition with a total prize package worth more than $50,000 and has become a huge hit with both engine builders and racing fans across the country.