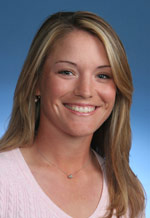 Ray Birden, senior vice president of marketing for CARQUEST Auto Parts comments, "Our organization is proud to partner with such a first-class citizen like Kim Hall. Kim is not only a tremendous golfer, but she is just as knowledgeable about her vehicle’s needs for preventive maintenance, as she is about her golf game."

Hall has earned considerable recognition in the women’s golf community through her accomplishments on and off the course. She earned a degree in American Studies at Stanford University while playing golf on the collegiate level. Hall played for Stanford from 1999-2003 and was named to the All-PAC-10 Team three times (1999-2000, 2001-02, 2002-2003). In addition, Hall is a two-time Stanford women’s golf team Most Valuable Player. Since graduating from Stanford, Hall has had continued success competing on the 2004 Futures Tour, and earning her LPGA Tour Card in the LPGA Qualifying Tournament in 2005.

Although, proud of her successes on the golf course, Hall is even prouder to wear the CARQUEST Logo and represent CARQUEST Auto Parts in an effort to create awareness between women and the auto parts industry.

"I am privileged to be associated with CARQUEST as they have been so good to my family over the years," says Hall. "Anytime we needed parts and maintenance performed on our vehicles, we always turned to CARQUEST and their affiliated service dealers. And no matter where I’ve lived, there’s always a friendly store to help."

Hall, like many women, feels that it is essential to be involved in the decisions and maintenance of her vehicle, Kim states, "When I have service performed on my vehicle, I trust the professional technicians who are working on it, but I also think it’s important that the auto technicians know that I understand that the service and quality of the auto parts used are just as important in my decisions as they would be in my husband’s decisions regarding the maintenance of our vehicle."

Hall is not alone; women’s involvement in decisions regarding their vehicles is a growing trend. In fact, 74% of women state they are solely responsible for making the maintenance decisions concerning their vehicles. As the trend of women’s involvement in vehicle maintenance continues CARQUEST Auto Parts and Kim Hall exist as an avenue to increase awareness and accessibility between women and the auto parts industry.

For more information regarding CARQUEST Auto Parts or Kim Hall, log onto www.CARQUEST.com