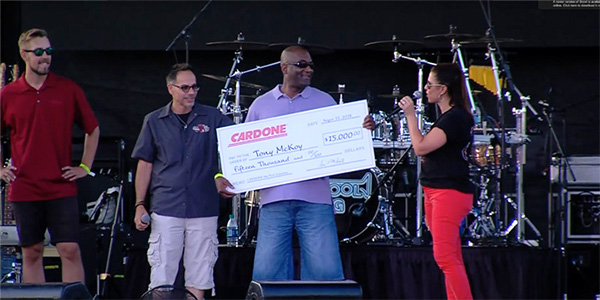 CARDONE Industries recently partnered with Swag Custom Rides to restore and give away Mystique, a fully restored and reimagined ’66 Chevy Chevelle. On Saturday, Aug. 11 during the Hot August Nights car show in Reno, Nevada, Tony McKoy, a United States Army veteran from McDonough, Georgia, was announced as the winner of the car giveaway, in addition to being awarded $15,000 and a full-expenses paid trip to Hot August Nights.

The CARDONE-sponsored giveaway received more than 8,500 entries from technicians and car enthusiasts across the country during the timeframe of Sept. 22, 2017 to May 31, 2018.

Mystique, created by Swag Custom Rides, features an eco-friendly ethanol 383 stroker engine, an engineering twist that allows the car to run on both gas and ethanol.

More than 8,000 attendees were present when Christin Cardone McClave, CARDONE’s chief people officer, and John Muratori, Swag Custom Ride’s founder and CEO, presented the vehicle to McKoy. “I want to personally thank CARDONE and Swag Custom Rides for this awesome ride,” said McKoy. “Something told me to enter this amazing giveaway, and I’m glad I did.”

“We’re so happy to have partnered with Swag Custom Rides on this giveaway, because we believe in their mission to help at-risk youth transform their lives and find rewarding careers in the automotive industry,” said McClave. “This was such a worthwhile promotion on many levels and I’m so pleased to see the winner is also a 22-year U.S. Army veteran.”