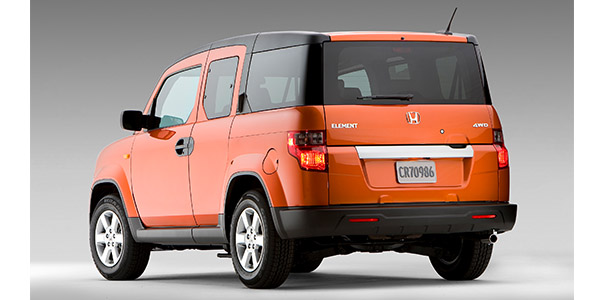 It may look like a car that was never removed from the box, but the Honda Element isn’t boxy when it comes to the brakes. The Element is based on the CR-V platform and, while there is nothing tricky about this brake system, it is hardware intensive, with floating shims, abutment clips and pad separator springs in the front.

There are no glaring TSBs or recalls for the Element’s brake system, but Honda recommends the use of an on-the-car brake lathe to machine the rotors.

All years use springs that push the pad away from the rotor. These springs reduce noise as well as improve fuel economy.

Like the front brakes, upper caliper pin and lower caliper pin are different. If these caliper pins are installed in the wrong location, it will cause vibration, uneven or rapid brake pad wear.

The rear parking brake is in the hat of the rotor. The only difficult item with replacing the shoe is reattaching the springs that hold the shoes to the upper pivots.

To adjust the parking brake lever, you have to remove the center console to access the equalizer bar. On the SC model with the larger center console, there is an access panel on the driver’s side.

Electronic brake distribution (EBD) is part of the ABS/stability system on the Element. EBD eliminates the need for a mechanical proportioning valve and improves overall braking performance.

EBD varies brake pressure distribution according to load, using input from the wheel speed sensors, which improves overall braking performance and stability. The most noticeable benefit of EBD is the reduction of nose dive during the last 20 mph of a stop. By controlling the nose dive, the vehicle is more stable.

Each time the ignition switch is turned to on, the active brake assist learns the current driver’s normal braking characteristics by monitoring the brake pressure sensor and the brake pedal position switch at each stop. Using these inputs and values, it learns the driver’s normal braking habits, and then determines the difference between a regular stop and a panic stop for the individual driver. If a panic stop is detected, the ABS pump is used to generate extra hydraulic pressure.