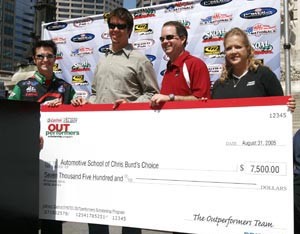 As the national winner, Chris Burd "outperformed" more than 600 students from across the United States. He receives a $7,500 scholarship to attend an advanced racing, high-performance or automotive education program.

The aim of the scholarship is the same as that of the Castrol SYNTEC Outperformers program – to expand young technicians’ knowledge of automotive maintenance and technology through continuing their pursuit of automotive service careers. As part of his scholarship package, Burd also receives a week-long apprenticeship with Funkmaster Flex’s Team Baurtwell in New York.

"We’ve enjoyed being involved in the SYNTEC Outperformers program these last four years," Force said, "because it encourages the young individuals who’ll be the racing crew chiefs of the future. I want to personally salute Chris Burd as the national scholarship winner."

"This is a great program, one that encourages young people like Chris to follow their dreams," said Medlen, second year driver of the Castrol SYNTEC Funny Car and a former mechanic on Force’s Castrol GTX car. "The driver gets all the credit, but it’s the crew that makes everything happen. With the growth of drag racing and NASCAR, there are going to be more and more opportunities for guys like Chris. And girls, too."

Burd, 18, graduated from San Luis Obispo High School this year and now attends Cuesta College, also in San Luis Obispo. He became interested in cars two years ago and has since dedicated himself to learning as much as he can about them.