Boosted Brakes: A look at the history of power-assisted brakes. 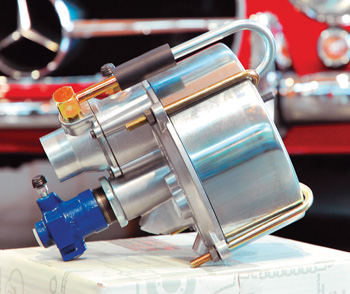 These days, we don’t even consider power brakes as something that needed invented, but merely a standard feature that we come to expect out of our daily transportation. Well they had to start somewhere. Probably the first place to look is with what got it all started; the law of fluids in motion and how it can be used to increase force. Pascal’s law of hydraulics.

Pascal’s law states that when there is an increase in pressure at any point in a confined fluid, there is an equal increase at every other point in the container.

It took Pascal to open our eyes to what could be done “hydraulically” with a fluid. Then in the early 1920s, Pierce-Arrow became the first car to take the Pascal basic theory and add a vacuum assist to the hydraulic brake system. This “inventive” way of assisting the driver while braking is now part of our everyday driving experience. 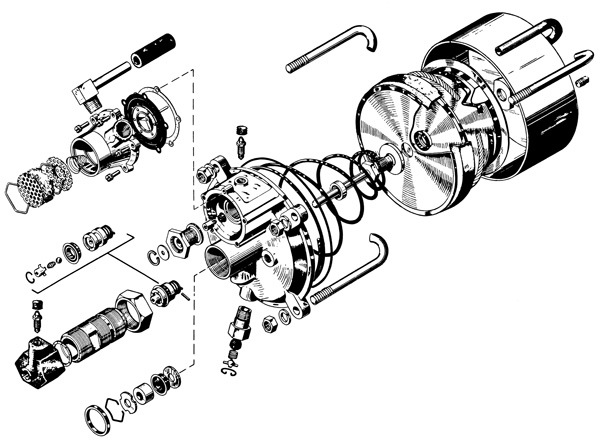 Around 1918, a young inventor took the Pascal idea and applied it to brakes. His name was Malcolm Lougheed (later he changed the spelling of his name to Lockheed).  In 1921 the Model A Duesenberg became the first car to have hydraulic brakes. Although they were not power assisted the effectiveness of the brakes was well noted compared to the mechanical brake systems that were common at the time. In 1938, there was a car called a Tincher that used air assisted brakes, but wasn’t really considered a power-assisted system.

Hydrovac
Starting in the early 1940s, one of my favorite types of brake systems to study is the Hydrovac brake system. If you’re a connoisseur of mechanical things, this is one you’ll need to get up and close with. Explaining this brake system is an Olympic event. In my book, it’s one of the true “mechanical” marvels of the brake world. At first glance there are so many things going on at the same time that it looks like it shouldn’t work, but it does.

As you apply pressure to the brake pedal, the fluid pressure is increased (Pascal’s law) to a slave cylinder and the wheel cylinders. As more pressure is applied, the added pressure overcomes a sliding valve that then pushes a triangular arm that in turn rotates valves to close an atmospheric valve and open a vacuum valve which then pulls the vacuum air into a large chamber that pushes a large bellow against the valve in the slave cylinder tripling the available fluid pressure to the wheels. The harder you push on the brake pedal, the more the bellows pushes the fluid towards the wheel cylinders. As you let up on the pedal, the internal valve starts to close lowering the vacuum pressure until it reaches atmospheric air pressure.

Last year, I restored a 1956 fire/rescue truck and one of the things I had to go completely through was the brake system. I’m still amazed at how this brake system works.  For nearly 30 years this was one of the most common brake systems on most large trucks and some cars. To this day you can still find this type of power brake system used on certain applications.  In fact, rebuilt units, rebuild kits and refurbished components are still available. As long as this system has a good supply of vacuum and clean fluid, the power brake system will do the job.

Stand on the brake pedal with a lot of force and I’ll guarantee you it will put the stop on those brake shoes with crisp jolt that can throw you up against the windshield. But the thrill for me is still watching the mechanical action of the internal parts of this mechanical marvel.

If you would like more information on this system, there are several videos and informative sites on the internet. I also found an early 1950’s military training video that explained it all in detail.

Hydroboost
The next system is a hydroboost system. The big difference between this system and the hydrovac system is the fact that there is no vacuum used to operate the “power” in the power assist. Generally, the power is generated by the power steering pump. In some cases, an electric motor applies the needed power to increase the pressure on the brake fluid.
In these systems, when the pressure is applied by the brake pedal, a port in the master cylinder allows the higher pressure of the power steering system to aide in the overall pressure of the brake system.

This is a great system for the hobbyist that wants a clean look or doesn’t want the bulky vacuum unit under the hood. I also see this type of unit on larger delivery trucks and commercial units.  Having less parts to be concerned with compared to the hydrovac unit makes this a very reliable system.  Today, you can find these units on some production cars, delivery vans, large trucks and commercial vehicles.

If space is a premium, the hydroboost system is a good choice for that special project car.

Vacuum Boost
Vacuum boost power brakes are by far the most popular type of assisted brakes. As with the last two examples the idea is to apply additional pressure to the brake fluid allowing less effort from the operator. Vacuum brakes do not need a slave cylinder to add the extra push or the need of a power steering pump to apply the pressure.  Just good old intake manifold vacuum. (Some diesels and small output engines used a belt-driven vacuum pump.) The principal is the same in each case, but the cost effective vacuum booster wins out on average production cars and trucks.

It’s a simple system; it’s effective and downright reliable.  The main principle behind vacuum boost brakes is to take atmospheric pressure and vacuum air and move one to the other.

Since the “atmosphere” wants to always balance the pressure, the vacuum is the “lack” of atmosphere air. So, as the plunger is pushed, a valve is opened allowing the air to move towards the vacuum section, which is turned into the added force against the brake fluid. 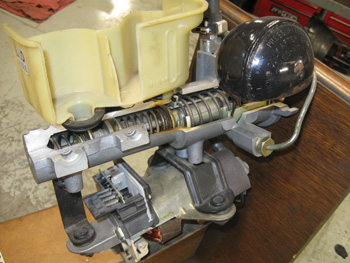 It’s impressive to think “air” is the real strength in the booster system. But it is.  Think of it as wind moving from a high pressure area to a low pressure area. The larger the difference in “atmospheric” pressure, the more intense the wind. That speed is the key in making the vacuum booster so reactive to the touch of the brake pedal.

Mechanical things intrigue me; I love to see how they work and how they accomplish their tasks. These boosters are just a small part of what I find interesting in the world of automotive repair. The better I understand how any system works, the better I can make the right decisions on the repairs.

Now in the 21st century, we have regenerative braking systems, anti-lock brakes and stability control. Along with the old standards there are even more brake systems to study and get familiar with. Keeping up with the changes is just another part of being a good technician in today’s world.

While every day is another learning experience, I also think it’s a good idea to study the history of this automotive world. What’s old becomes new, but in a newer element.  So when you see something that you believe is a new and inventive, check the history books and you may find out that it’s not that new.

There is this one little foot note that I thought was interesting, and I guess in a way it still applies today: printed in 1909.