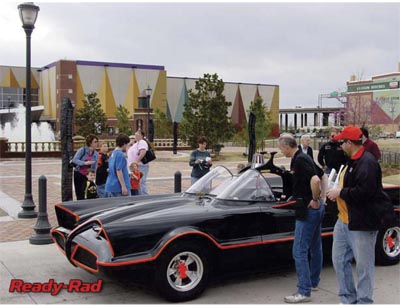 John Schneider, manager of Proliance International’s branch in Oklahoma City, got what he thought was a crank call the other day.

“The guy said he needed a radiator for a 1966 Batmobile, the one from the Batman TV show, starring Adam West,” Schneider said. “I thought it was a joke until it turned out that the caller was serious and really needed a radiator.”

“We had the Batmobile in Oklahoma City to display at a charity event to benefit The MS Bridge, a local non-profit organization whose mission it is to raise funds for Multiple Sclerosis patients who need financial assistance,” said Jeff Binion, special events coordinator for the Kruse Museum in Auburn, IN. “As we were driving the Batmobile from one show site to the next we noticed we had a coolant leak from the radiator area and upon further investigation we found out we needed to replace the whole radiator. The Kruse Museum called Schneider, who had them take a few measurements on the existing unit in the vehicle. Schneider had the right replacement in stock, a Ready-Rad 43-3390.”

“It was a perfect fit and we had the new unit installed in no time,” said Binion. “Another Ready-Rad example of our commitment to serve our customers with the right part, at the right place, at the right time.”

The Batmobile is permanently on display in the “Batcave” at the Kruse Automotive and Carriage Museum. Its sleek lines and gothic look make it one of the most recognized cars in television history. The museum is operated by the Dean V. Kruse Foundation and, in addition to the Batmobile, it features a variety of vehicles in its 40,000 square feet of display, including a Duisenberg, an Indy Race Car and other unique movie and television cars.