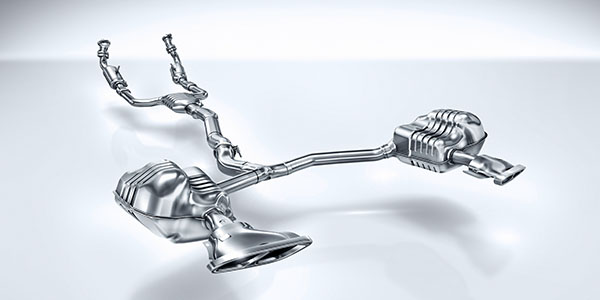 Understanding the relationship between the exhaust system and engine is important when preparing to take the ASE X1 certification test.

The X1 ASE Certification Test has a section (8 questions) focused on emissions system diagnosis. For that section, ASE defines the tasks as:
• Identify failed catalytic converter(s); determine the cause of failure.
• Identify failed oxygen sensor(s) (O2S/HO2S) ­component(s) and circuitry; determine the cause of failure.
• Inspect emission systems for evidence of tampering (missing/modified and/or improperly installed ­components).

The keys to passing this section are:
• Oxygen sensors measure oxygen, not the fuel.
• Where an exhaust leak is located in reference to the oxygen sensor can determine the readings from the sensor.
• The shield on the catalytic converter and pipes plays a critical role in heat management and noise of the exhaust system.

Restrictions
Next, to reveal if any ­restrictions exist within the exhaust system, you’ll need to ­perform a vacuum test or backpressure test. In the exam, they will ask questions about the relationship between back pressure and engine vacuum.

Testing for Restrictions
Connect a vacuum gauge to a manifold vacuum source to perform the test.

Run the engine at idle. Vacuum should remain steady and within specifications. If vacuum drops toward zero, this indicates that there is a restriction. Continue the test.

Slowly increase engine speed to 2,000 rpm. Vacuum should remain as high as at idle.

Quickly close the throttle. Vacuum should rise rapidly to above idle level. If the ­reading is 5-inHg or more below normal, and then returns slowly and unevenly, the exhaust system is restricted.

Backpressure Test
Use this test only on vehicles with dual-bed bead-type ­converters.

Disconnect the hose at the secondary air manifold and remove the check valve.

Use an adapter to connect a fuel pressure gauge to the air manifold.

With the engine at normal operating temperature and ­running at 2,500 rpm, check the backpressure reading on the gauge. If it is above 1.75 psi (12.06 kpa), the exhaust system is restricted. 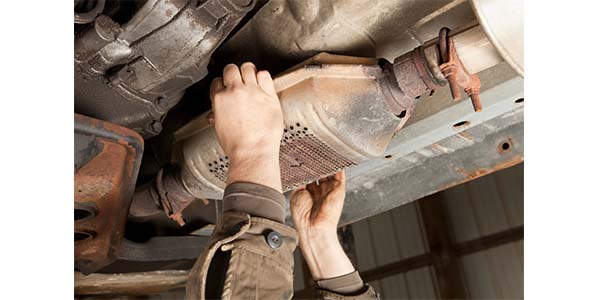 Operation
For the exam, know that the purpose of the three-way converter is to help clean the NOx, HC and CO emissions in the engine exhaust, hence the term “three-way.” Three metals (platinum, palladium and rhodium) are used as catalysts to promote the conversion of the emissions, which occurs in two stages.

In the first stage, the catalyst encourages NOx to break down into free nitrogen (N2) and free oxygen with the oxygen portion encouraged to further oxidize CO into less harmful carbon dioxide (CO2).

In the second stage, the ­oxygen-enriched emissions pass over a second catalyst that encourages further oxidation of HC and CO into water vapor and carbon dioxide. Effective catalytic control of all three pollutants is possible only if the exhaust gas contains a very small amount of oxygen.

Oxygen Sensors
To check a converter’s efficiency, two oxygen sensors are required — one upstream and one downstream. This way, oxygen storage can be determined by ­comparing the voltage signals.

Oxygen sensors monitor the oxygen content in the exhaust gases. You may hear an oxygen sensor referred to as a one-, two-, three- or four-wire sensor. All oxygen sensors have one wire that is called a signal wire that goes to the ECM. Ground can have its own wire on some sensors, but the ground of a one-wire sensor is the connection with the bung. The other wire or wires ­supply power for a heater.

To test converter efficiency, the PCM runs rich and lean air-fuel mixtures, to overburden the converter, and the H02S switches are counted. A switch is counted when a ­oxygen sensor signal goes from below the lean threshold to above the rich threshold. The switching ratio is determined by dividing the number of switches at the rear sensor by the number of switches from the front sensor. As ­catalyst efficiency deteriorates over the life of the ­vehicle, the switch rate at the downstream sensor approaches that of the upstream sensor.

There are several factors that can adversely affect the monitoring of catalyst efficiency:
• Exhaust leaks. Allowing excess amounts of oxygen to enter the exhaust system can mask a faulty converter.
• Fuel contaminants such as engine oil, coolant, phosphorus, lead, silica and sulfur can interfere with the converter’s chemical reaction, affecting the catalyst’s oxygen storage capacity.

The key to passing the X1 and correctly answering all the questions is to understand the entire system from the intake manifold to the rear oxygen sensor. Being able to think through a restriction, leak or catalyst efficiency problem is critical.

Advertisement
In this article:ASE Certification

More Than Codes: Finding The Story Behind An Emission Code