No more written exams. That was one update on the National Institute for Automotive Service Excellence (ASE) given by Tony Molla, vice president of communications for ASE, at the Collision Industry Conference held Jan. 12-13 in Palm Springs, CA. 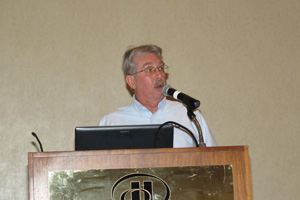 Molla said the non-profit certification organization’s tests are 100-percent computer-based now but are still conducted at secure test centers. Also, the testing is done four times per year now, which increases availability across the industry.

Molla also talked about the looming employee shortage, which he says the industry hasn’t taken serious yet because “we haven’t had a problem fixing cars.” He cited the increasing number of older technicians retiring and the lack of qualified entry-level techs. Also, that 10,000 Baby Boomers a day are reaching retirement age. According to Molla, 26 percent of the U.S. population, or 35 million people, were aged 55 to 64 in 2010, and 44 million more will be in that age bracket in 10 years.

“We need to do a better job of connecting qualified students with employers,” said Molla. “The traditional paths into the industry have changed. A lot of training we used to have was on-the-job training, but that’s not very cost effective or efficient anymore.”

Molla believes the ASE Industry Education Alliance, consisting of ASE, NATEF, AYES, NACAT and ATMC, is making much headway in establishing a network and hiring strategy to get the technicians shops need when they need them.

Auto technology, Molla said, is increasing at a frightening pace – all the more reason to place heavy emphasis on training and certification.

“The average vehicle is now 10 years old,” said Molla. “What will the 10-year-old vehicle look like 10 years from now?”

The benefits of tapping into the ASE Industry Education Alliance, Molla said, are:

• Connections with students, instructors and techs