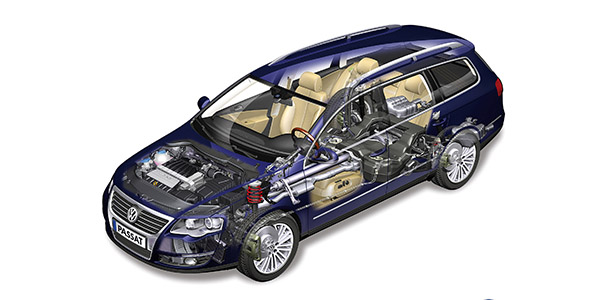 The VW B6 Passat for 2006 was an entirely new design. It was followed by the coupe CC in 2009. The complicated four-link front suspension from the B5 platform with four ball joints was replaced with a cast-aluminum lower control arm and a MacPherson strut. In the rear, the Passat received an independent suspension with a trailing link design.

The VW B6 Passat for 2006 was an entirely new design. It was followed by the coupe CC in 2009. The complicated four-link front suspension from the B5 platform with four ball joints was replaced with a cast-aluminum lower control arm and a MacPherson strut. In the rear, the Passat received an independent suspension with a trailing link design. And, the design of the AWD model’s rear suspension was much more simplified. But, when VW simplified the suspension, it took away any front camber or caster adjustments.

The B6 Passat may seem like a “toe and go” vehicle, but if this approach is used, it could result in some unanticipated problems.

Pre Alignment
VW has a few recommendations before performing a four-wheel alignment.

Measure the tread depth difference from side to side. According to Volkswagen, a difference of 2mm on an axle can cause a pull condition.

The service information on the alignment recommends that the fuel tank be full when performing an alignment. This means that the Passat carries approximately 100 lbs. of fuel around the area of the backseat. It may not seem like a lot, but it can change the caster readings.

Front Suspension
The front suspension uses a cast-aluminum lower control arm and MacPherson strut. The only way to change the camber is to shift the cradle side-to-side. Shifting the front cradle requires losing the bolts, and only small adjustments can be made. New bolts must be used because they are torque-to-yield and stretch to create stable clamping loads.

If the camber or caster is out of specification, look for worn components such as bushings.

Rear Suspension
In the rear, the toe and camber are adjustable. Toe can be adjusted with the factory-installed cam bolt on the lower transverse link. A factory-installed cam bolt in the upper transverse arm can change rear camber. If the camber is significantly out of specification, there are aftermarket control arms that can adjust the suspension plus or minus three degrees.

Post Alignment
The B6 Passat included options like lane departure warning and adaptive cruise control. It also has stability control standard. These features depend on two things to work. First, the car must be pointing straight ahead with the thrust angle and total toe within specifications. Second, the steering angle sensor must be sending the correct information. Without these two things, these advanced systems will not function properly.

VW recommends that the sensors for the adaptive cruise control be recalibrated after any rear toe adjustments are made. The system uses a narrow radar beam that comes from a module mounted behind the VW emblem. If the vehicle has a thrust angle problem, the pull or the steering position sensor may not be calibrated properly and the beam may not be pointed in the right direction. To calibrate the radar sensor, you need a compatible scan tool and special VW calibration tools.

The same is true for the lane departure system. “Lane Assist” keeps the vehicle in a lane and warns by shaking the steering wheel if the driver has drifted from its lane. The system starts working at 40 mph and only if the lane has markings. On later models of the CC, the system is active and can counter steer to return the vehicle to the lane.

The camera is mounted in the rearview mirror mount. It also uses a steering torque sensor that is sensitive enough to detect the driver’s hands on the wheel. But, to make the system work, the vehicle has to steer straight and the steering position/torque sensor has to be correctly calibrated. If the steering pull exceeds the force, the counter-steering can generate, and the system will deactivate.

Collision avoidance or the lane assist system will not need attention during a conventional alignment if the rear toe is not adjusted. But, if the radar sensor or camera is disturbed from their mountings, they need to be put into adaption mode with a scan tool and calibrated with the appropriate targets, followed by a test drive.

Advertisement
In this article:alignment, Volkswagen Passat

Suspension: Tilting Shocks On A Tacoma

Jaguar Tech Tip: No Communication With Chassis
Connect with us