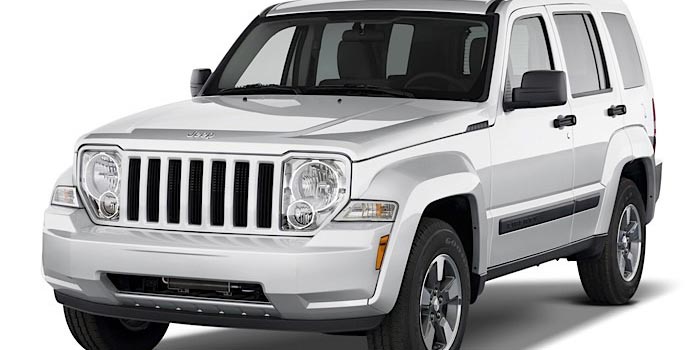 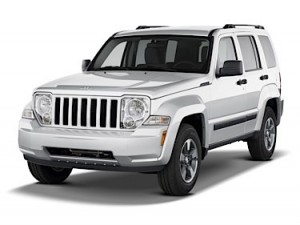 Instead of having to install offset ball joints and shims to adjust camber and caster, the adjustments are performed with the cam bolts in the lower control arms. The rear is not adjustable.

If serviced, the control arms should be tightened with the vehicle at normal ride height due to the bushings. It is important to have the springs supporting the weight of the vehicle when the fasteners are torqued. If springs are not at their normal ride position, premature bushing wear may occur.

The control arms of the Liberty are robust, but the stock ball joints are recognized as a weak link. Jeep issued five recalls concerning ball joint failure for various 2002-2006 models. Most of the recall documents cite corrosion of the joint as the cause of the failure. The culprit is water intrusion, which has often been blamed on poor sealing of the boot and/or a missing heat shield on early models that allowed the boot to be degraded.

Use care when applying the load to the knuckle so the parts are not damaged, and be careful not to tear the boot. From the front of the vehicle, insert a pry bar to get it rested on the lower control arm and use the lever principle to push the knuckle up until the arm of the dial indicator no longer moves.

On 2002-2007 models,  the single upper control link looks like a boomerang and utilizes a single ball joint mounted to the axle. There should be no play in this joint. If it is worn, it may not change the thrust angle, but it will make noise.

On 2008 and up KK models, Jeep changed the rear suspension and ditched the single upper control arm for a four-link setup with a lateral link.

Front ride height is defined by the vertical distance between the spindle and the rear pivot point of the front lower control arm bolt. When the car rolls off the line, the two points should be parallel, +/-10mm.

Rear ride height is defined by the vertical distance between the top of the lower spring seat strike surface and the bottom of the jounce cup (true metal-to-metal jounce travel). This is to be measured vertically inside the coil from the point intersecting the inboard edge and the fore/aft center of the jounce cup down to the strike surface. The distance should be 97mm (+/- 10mm).

For the front and rear, the heights should not differ more than 7mm side-to-side.

Jeep has gone back and forth on whether they should install cams on the lower control arms, but every Liberty has the fences for the cams. Before you quote the price of the alignment, make sure to check for the cams.

6 Reasons The Steering Wheel Is Not Straight

1. Rear Toe/Thrust Angle: Rear toe and thrust angle is directly related to the position of the steering wheel while going straight. You can align a vehicle with perfect front toe, but if the rear toe is off, the steering wheel will not be straight going down the road.

2. Tie Rod Length: When performing a toe adjustment, the front tie rods should be adjusted equally so the total toe is within specifications. Adjusting just one tie rod in most cases will give you an off-center steering wheel.

3. Ride Height: The rear toe is sensitive to ride height on rear independent suspensions. This is done to increase vehicle stability under braking and acceleration. Camber is also a consideration because camber can cause the steering to pull in one direction.

4. Tire Pressure: Inflation is one of the most critical items to check before performing an alignment. A low tire will cause changes in the rolling circumference of the tire. A low tire on one side of the vehicle can cause a pull in towards the side of the low tire and cause the steering wheel to be off-center when driving.

5. Bent Components: Many vehicles have aluminum suspension components. Aluminum does not bend like steel, it tends to break in a catastrophic manner. Most OEMs have engineered components that are allowed to deform in case of a curb impact. Typically, these are toe links, steering arms and control arms. These items might be made of steel so they can bend without breaking.

6. Tire Constructions: Not all tires are the same. Even the same model can have small changes in the manufacturing and construction of the tire. Small changes in layers of the tires can cause the vehicle to pull in one direction. Technicians can solve this problem by changing the position of the tires, or they can use a balancer that can measure the amount of force in a tire and wheel assembly to recommend optimal placement.

Springs Are The Foundation Of Stability