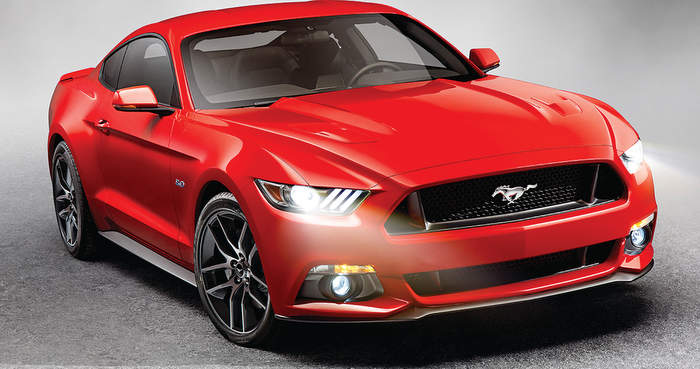 In 2005, Ford introduced a new Mustang with an all-new platform and clean-sheet design. While the formula of a live axle rear and MacPherson strut front end were the same from the previous model, Ford refined the design. These changes make for a vehicle that is easier to align and diagnose compared to the previous generation. 2014 is the last year for this generation of Mustang.

The Mustang uses a live rear axle mounted on the vehicle with three links and a Panhard rod. None of the angles are adjustable, but that doesn’t mean this is a “two-wheel” alignment. The thrust angle is critical to aligning the front suspension and is also an indication of the health of the bushings in the control arms.

If you have a customer that is complaining about shudder or hopping on acceleration, check the hydro bushing on the top of the axle. Also, check the condition of the rear transmission mounts because they can mimic the same symptoms.

Mustang makes use of an independent MacPherson strut front suspension with reverse “L” lower control arms. On this generation of Mustang, the control and steering arms are designed to deform in case of contact with a curb or other obstruction. Compare measurements like setback and steering angle side-to-side if there are any large discrepancies.

The ball joint on these Mustangs is non-serviceable and must be replaced with the entire control arm. The ball joint has a deflection limit of 0.3mm (0.012”). These loaded ball joints can be tested by pulling up and down on the control arm while the suspension is loaded. If you can feel any movement, chances are the joint is worn out.

The front lower control arms also use a “hydro” or hydraulic rubber bushing in the rear mount. Bushings in the front control arms can change the camber and caster by ± 1.0º or more if they are worn. Visually inspect the bushing and look for any cracks or separation of the rubber from the shaft and shells.

Drivers may comment they hear a grunt, creak or chirp noise while driving over bumps, like speed bumps and curbs. This is a sign of a bad lower control arm bushing. This noise is different than a noise caused by a worn sway bar or upper strut mount. Strut mounts and sway bars will make a clicking or popping noise on these Mustangs.

There are aftermarket high performance bushings for this generation of Mustang, but the customer may notice more noise and vibration transmitted to the vehicle if installed. This is acceptable for some drivers, but for others it could mean a comeback for your shop.

For 2011-‘14 models, Ford issued TSB 13-9-3 concerning vehicles that may exhibit a grunt/creak/chirp/squeak noise from the front lower control arm hydro bushing. These noises may occur over large vertical bumps like speed bumps, pot holes, rough roads and driveway approaches. The cure is to compare the sounds the hydraulic bushings make and replace the noisiest bushing.

Stock upper strut mounts are non-adjustable, but some aftermarket strut mounts are adjustable and can give an additional ±2.0 of caster or camber. These parts are helpful when aligning vehicles that have been lowered up to 3”.

If camber adjustment is necessary to resolve a vehicle alignment issue, then slotting the strut at the lower mounting hole and installing a cam bolt is the recommended method. This should give ±1.75º of adjustability.

Make sure to remove the wheel speed sensor bolt and brake line bracket bolt before pulling the strut.

Do not enlarge the holes any more than indicated by the etchings on the strut mount, and clean and paint the exposed metal. The bolts should be tightened to 200 Nm (148 ft.-lbs) after the adjustment is made.

To adjust front caster, elongate the mounting holes in the front control arm mounting bracket on the subframe, but do not elongate the holes any more than indicated by the etchings on the subframe. This modification will yield about ±1.0 of caster. Tighten the nuts to 175 Nm (129 ft.-lbs). Adjustable upper strut mounts can be used to give ±2.0 of adjustability, but this requires modification of the strut tower.