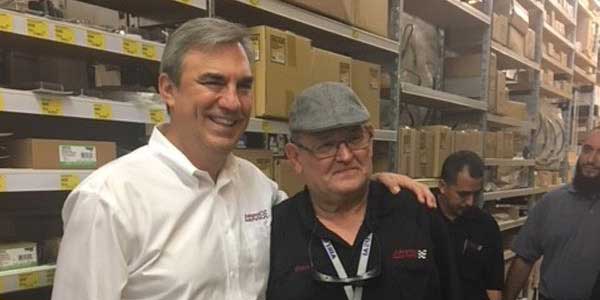 On a recent visit to southwest Florida, Advance Auto Parts President and CEO Tom Greco met with team members in Fort Myers, Bonita Springs, and Naples who were affected by Hurricane Irma and visited with the company’s field team who led hurricane preparedness, response and relief efforts. Greco visited several of Advance’s 45 stores along the southwest Florida coast, and met with local professional customers that rely on Advance to deliver them auto parts.

Advance Auto Parts operates 427 stores in Florida and has more than 5,000 team members who work in the state. All full and part-time Advance team members were paid for their scheduled hours during and after Hurricane Irma, even if a location was closed due to the storm or flooding.

Thanks to early preparation and tireless response efforts of the Advance team as well as the support of local communities, all but one Advance location in Florida reopened within days of Irma passing to serve DIY and professional customers in the area. An Advance store in Marathon, Florida, sustained significant wind damage and remains closed. Team members displaced from that store were moved to other locations so they could continue working, and Advance added additional delivery routes to ensure professional customers in the market continue to receive the parts they need to keep their businesses running.

“I am extremely proud of the efforts by our Florida team, who have showed what it means to have a passion for caring for our people and our customers,” said Tom Greco. “Hurricane Irma significantly impacted many of our team members and their families, some of whom suffered significant damage to their homes or loss of personal belongings. Our entire company has rallied around these team members as well as our customers throughout Florida. On behalf of all of us at Advance Auto Parts, I want to commend our entire Florida leadership team for standing tall against adversity and being prepared and quick to respond to help our people and our customers in a time of great need. Our company’s mission is ‘Passion for Customers – Passion for Yes!’ ­and these efforts certainly exemplify that mission. We are proud to continue to support recovery efforts for our team, our customers and the communities we serve in Florida.”

Greco’s visit continues a series of proactive disaster plan and recovery efforts led by Advance, which has raised more than $450,000 through a Team Member Assistance Fund to support the company’s team members in impacted areas. Funds have already been distributed to support more than 50 team members in Florida who were impacted or suffered significant home damage by Hurricane Irma. The Team Member Assistance Fund is a non-profit fund, providing help to Advance team members who experience hardship due to a natural disaster or other events beyond their control.

Support from Advance for Florida communities is ongoing as Advance works with customers to ensure product availability and the supplies needed to do business are available to the region’s automotive industry.

“We go to great lengths to take care of our team members and customers in times of need. Preparing for and responding to an event like Hurricane Irma is just one example of how Advance is prepared to do what is necessary to serve its customers and make sure our team members get back on their feet,” said Ayres.

Advance locations in Florida were proactively closed on a rolling basis to allow team members to evacuate or seek shelter, and the company’s field leadership team stayed in contact with every team member in markets impacted by Irma to ensure they were safe. Advance also coordinated deliveries of emergency supplies such as water, generators and gas to impacted markets to ensure professional repair shops and stores could reopen to serve customers as quickly as possible.