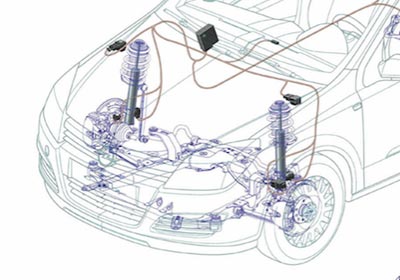 Why would an engineer or automaker include this feature on a vehicle? An active dampener allows for a ride without compromise. The three inputs can be used to detect a rough road or an emergency situation where body roll could change the stability of the vehicle.

Electronically adjustable shocks and struts use conventional mono-tube and twin-tube oil-filled dampeners. The rods, gas chambers and piston have the construction of passive units. Like a passive unit, they can fail if they leak, the gas escapes or the rods are bent. They can also wear out like a conventional unit as the oil inside breaks down and surfaces in the bore wear.

What makes these units unique are the valves with their variable orifices. These valves regulate the flow between the chambers on either side of the piston. The piston in some units, however, does not have any valving.

The size of the orifices controlled by electromagnetic solenoids that can control the valves very quickly. The electrical connections and solenoids are typically found outside the body and act on the valves inside the unit using magnetism. The signal to the solenoid is pulse-width modulated and varies the voltage to change the size of the orifice.

The valves and solenoids can’t be serviced or separated from the shock or strut. If a problem is detected with the system, the valves go into a fail-safe position that is fixed, and the system becomes passive. The driver is then alerted to the problem with a message or light on the instrument cluster or message center. 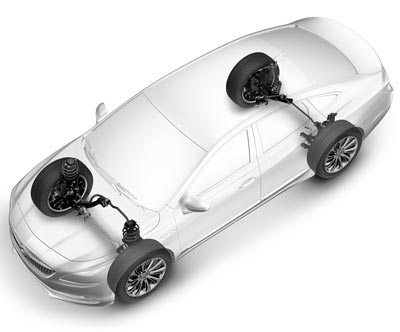 Ride-height sensors are sometimes called suspension-position or wheel-displacement sensors. The data from the sensor is used to measure the movement of the suspension. By knowing how far and fast the suspension is moving, the module can use the information to determine the size of the orifice in the dampener to control compression and rebound. These sensors should be calibrated if a sensor is replaced, a module is reprogrammed or if the battery dies.

Accelerometers mounted to the body measure changes in the ride. These accelerometers are typically mounted to the strut towers. These sensors output information as gravitational forces, or “G-force” to a module. Changes in body roll due to cornering will produce lower G-force than a pothole would.

Information from the accelerometers is coupled with data from the ride-height sensor, steering sensor and other inputs by a computer processor in a module. The module can determine if the vehicle is going around a corner or traveling down a bumpy road. With this datastream, the valving inside the dampener can be adjusted in milliseconds for the best control and ride quality.

The accelerometers on the body differ from vehicle to vehicle. Some manufacturers mount the sensors under the headlights, on strut towers and near the tail lights. More sophisticated systems use more than two accelerometers mounted in various locations. 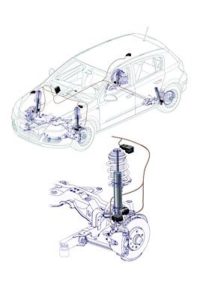 With all this information, the module can do some amazing things with the adjustable dampeners. Problems like nosedive under braking, torque steer and understeer on front-wheel-drive vehicles can be minimized. If the vehicle has air ride, the volume and pressure inside the air springs can also be tuned along with the valving in the dampeners to optimize ride quality and control.