A brand name as well-known in Europe as Ferrari, family-owned Italian tool company Beta Utensili S.p.A. is looking to test the water on this side of the pond, with a new distribution agreement with Peerless Hardware in Pennsylvania. 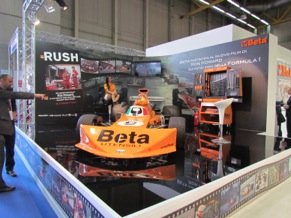 A brand name as well-known in Europe as Ferrari, family-owned Italian tool company Beta Utensili S.p.A. is looking to test the water on this side of the pond, with a new distribution agreement with Peerless Hardware in Pennsylvania. As of now, Peerless is the exclusive importer of record for Beta products in the U.S. The company is a generalist in the tool and equipment market with its nearest similar competitor in the U.S. being Snap-on. The business was founded in 1923 in Milan, and the brand name "Beta" was trademarked in 1939.

Best known for its involvement in Formula 1 and MotoGP racing in Europe. Over the years, the company has had partnerships with prestigious teams, including Ferrari, Jordan, McLaren and Minardi in Formula 1, and Honda, Suzuki, Kawasaki and Yamaha in MotoGP. Beta offers a product portfolio of more than 10,000 SKUs — from wrenches and socket sets to tool chests and even a line of fashionable work wear, shoes and safety boots. The clothing range, however, is sold only in Europe. The company has three manufacturing plants in Italy, where the bulk of its products are made.

During a meeting over traditional Italian lunch fare at its stand at Autopromotec 2013 in Bologna, Italy, Beta Export Manager Alberto Cattaneo told a group of journalists that the company is known for its high quality throughout Europe; however, Cattaneo said the company has hesitated to expand into the U.S. market until now, unsure if the brand would be well-received. His expectations were exceeded, he said, during recent visits in the U.S. with Peerless and Tool King customers.

"I was overwhelmed by the response," Cattaneo said. "I think there is space for Beta within the traditional [U.S.] distribution model."

Currently, more than half of the company’s business is export, and it’s increasing as the European crisis continues to impact the local markets. Beta has eight subsidiaries in Spain, France, U.K., The Netherlands, Poland, China, Brazil and Cuba, and 200 distributors in more than 100 countries.

Going back to its deep roots in racing, at one time, the company also had its own car running in F1, a reproduction of which will soon be seen on the silver screen in the upcoming Ron Howard film "Rush." The film — a true story — is a mystery centered around a Formula 1 race that took place in 1976. When the film was being made, the filmmakers reached out to Beta to ask if they could use old Beta tools and work wear, and even a reproduction of its own former F1 vehicle will be used in the film. "Rush" will officially premiere Sept. 12 at the Venice Film Festival and Sept. 20 in the U.S.

To learn more about the availability of Beta tools in the U.S., visit Peerless Hardware at www.peerlesshardware.com.