Sprint Cup Series star Ryan Newman and modified tour regular Justin Bonsignore made Wednesday night’s NASCAR Whelen Modified Tour race at Bristol a 1-2 finish for Performance Friction Brakes. Both drivers were running full PFC brake packages including ZR34 calipers, discs and Carbon Metallic race pads. In fact, the ZR34 caliper is no stranger to victory lane with countless wins due to its reduced weight, quick response and smoother release. With all the benefits of Performance Friction Brakes it’s no surprise that 5 of the top 8 finishers were running PFC. 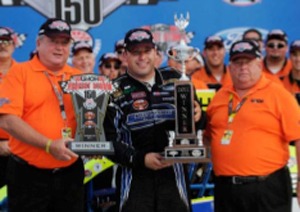 The Rocketman, Ryan Newman was able to lead 109 of the 150 laps to take his second consecutive victory at Bristol and his 4th career NASCAR Whelen Modified Tour victory overall. The race began with numerous cautions which collected several contenders including George Brunnhoelzl, III, Mike Stefanik and Andy Petree. When the checkered flag waved only 8 cars remained on the lead lap after a record 9 cautions. With Newman and Bonsignore finishing 1-2, third went to Todd Szegedy, fourth to James Civali and fifth to Patrick Emerling. The win was all about redemption for Newman and his team after being disqualified following New Hampshire’s modified race. “We wanted to come out here and on the one hand, we wanted to redeem ourselves after Loudon, but on the another hand we had to start all over and prove that we can do it however they make up the rules,” Newman said.

Justin Bonsignore was happy to come home with second place after avoiding numerous incidents. “We avoided some wrecks that we should have been in. We got lucky getting through those,” said Bonsignore. Though the race was filled with cautions the series put on a great show for the fans in attendance and those watching at home during the live Speed Channel broadcast. The next race for the NASCAR Whelen Southern Modified Tour is just a few days away when the series heads to Caraway Speedway on Friday. Performance Friction would like to congratulate Ryan Newman and Justin Bonsignore as well as the rest of the top ten finishers on Performance Friction Brakes.