At Issue: E15 fuel blends could be available by March or April of 2011, assuming the EPA makes two approvals for use of E15 in 2001 cars and newer models by the end of the year.

A number of industrial groups have banned together and are lobbying to have the U.S. EPA reconsider its ­decision to allow for widespread ­distribution of E15 fuel early next year.

The main organizer of the groups — www.FollowtheScience.org — said in a press release in September that without waiting for “comprehensive testing,” the Environmental Protection Agency (EPA) may allow an increase in the ethanol content of gasoline from 10% (E10) to 15% (E15). “That’s a 50% increase in the amount of ethanol in a gallon,” the
organization said.

The groups also contend that the ethanol industry is pushing for approval of this provision despite the fact that E15 could harm many types of engines and the environment, as well as increase food prices across-the-board.

“The new model year is upon us but with the economy in the dumps, more and more people will be relying on older cars. Yet very few motorists are aware of the strong possibility of a major change in the makeup of their gasoline  – a change that could prove problematic for cars now on the road,” the release stated.

The Obama administration is expected to rule in the next month whether these ethanol blends can be mixed with gasoline at the higher rate of 15%. According to the EPA, it has already delayed approving E15 twice since the issue of increasing fuel blends to E15 was introduced in early 2009.

***UPDATE: EPA Grants E15 Waiver for Newer Vehicles — However, no waiver is being granted this year for E15 use in model year 2000 and older cars and light trucks – or in any motorcycles, heavy-duty vehicles, or non-road engines.***

Advocates of the improved biofuel say this will lead to cleaner burning, home-grown fuels in an effort to reduce the U.S.’s dependency on imported oil.

The FollowtheScience group contends that, “the government’s testing on the effect of E15 fuel on car engines is totally inadequate.”

Areas the group said the government is not studying include what effect extra ethanol will have on:

• The life of a vehicle’s engine, even for newer models;

• Causing the check engine light to come on either unnecessarily, causing undue driver concern and needless trips to the service station, or too late to avoid costly repairs; and

• The performance of the vehicle’s fuel tank, fuel pump and fuel level sensor.

“These are all questions for which you should have answers before you start filling up your car’s gas tank with E15. But the EPA is not waiting for answers. Our government is set on a course of action that’s essentially, ‘Pump first. Ask questions later,’” the release said.

Testing, 1, 2, 3…
However, according to The Star Press in Muncie, IN, ethanol supporters said engine testing had been performed and that they were optimistic that the EPA would approve the increased biofuel percentage of E15.

“We are still confident that we submitted enough data that they can go to E15 in all gasoline engines. — Period,” said Tom Buis, CEO of Growth Energy, a group of farming and biofuels interests. “We’re confident that the (government) testing will confirm what we’ve known all along.”

According to The Star Press, the EPA is wrapping up testing on post-2006 vehicles this month, and that it will finish tests on those made from 2001 to 2006 by the end of November.

The paper quoted EPA Administrator Lisa Jackson on Sept. 13, saying that, “Those tests are examining whether an increase in ethanol would have any detrimental effect on car engines and their missions systems.” She added that, whatever decision is made “will serve the public interest.”

And, in a recent release from automotive research firm Ricardo, that company said that it had performed E15-related testing on vehicles as far back as model year 1994.

The research study carried out by Ricardo, Inc. for the Renewable Fuels Association, was to address the potential impact upon older vehicles — those from 1994 to 2000 model years.

According to Ricardo, while significant research efforts have been made to date in studies sponsored by the U.S. Department of Energy and other government and industry bodies evaluating the potential impact of E15 on 2001 model year and newer vehicles, minimal engineering analysis has previously been focused on earlier model year vehicles.

The proportion of vehicles manufactured in this era, but still in use today, is however, significant. The model years 1994 to 2000 represent a total of 62.8 million vehicles or approximately 25% of the current overall U.S. light-duty vehicle fleet.

Based on the engineering analysis performed, the conclusion of the Ricardo study is that the adoption of E15 as the blend limit for standard U.S. pump grades of gasoline should not adversely affect vehicles manufactured between 1994 and 2000 in terms of their performance and durability, based on normal specifications and usage profile.

As such, it can reasonably be concluded that these vehicles do not represent an obstacle to raising the blend limit to E15 from the E10 that currently forms the basis of much of the commercially available U.S. gasoline motor fuel.

In considering the potential risks and benefits of increasing the current ethanol blend ceiling in regular gasoline from 10% to 15%, it is crucial that the interests of the potentially very large stakeholder group represented by the owners of these vehicles are investigated.”

Niederhofer continued, “While many previous studies by Ricardo and others have evaluated the impact of higher ethanol blends on newer vehicles, this study demonstrates for the first time that raising the blend ceiling to E15 is likely to have a negligible impact on vehicles manufactured between 1994 and 2000.” (Source: www.ricardo.com/en-gb)

Confusion at the Pump
The FollowtheScience group also explained that E15 will lead to consumer confusion and misfueling.

Another issue confusing consumers is the potential damage to their vehicle.

Steven VanderGriend of ICMInc.com, a bio-fuels engineering firm, said in recent weeks, several articles have come out against E15, stating ethanol burns hotter than gasoline. Citing reports and advertising from the FollowtheScience group, VanderGriend said while those against E15 are repeating this issue of engines burning hotter with ethanol, they clearly don’t state the whole story.

“The main issue today holding the approval of E15 is exhaust catalysis temperature. Now the public is being told ethanol will burn up their engine and this is clearly false information,” he said.

VanderGriend said the issue at hand is technically called “learned fuel trim” while operating the vehicle at wide-open throttle.

“Many people will rarely even operate their vehicle to this level of acceleration, as this testing did to prove an objective. Many don’t realize that their vehicle is over fueling by somewhere near 20% when they race up the on ramp and most don’t realize that this operation is the most pollutant area of operation since the vehicle is not at best fuel ratio for exhaust catalysis efficiency.” 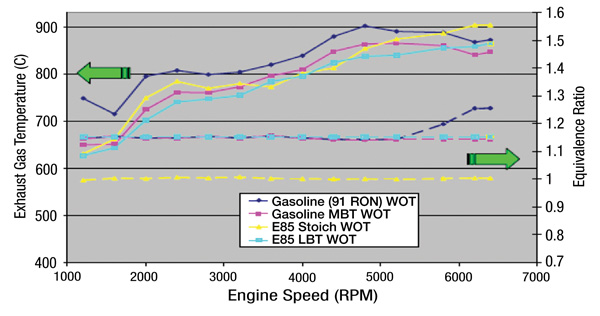 VanderGriend said studies show that ethanol burns much cooler, which also has another benefit for efficiency.

“Ethanol has four times the cooling effect as gasoline and by this picture from a study conducted by GM (Figure 1), one would see that ethanol burns cooler both at the high pollution area of fuel enrichment and running at optimum non-rich fuel mixtures all the while operating at wide open throttle,” he said.

The Road Ahead
In September, agriculture secretary Tom Vilsack told reporters that he expected the EPA to approve higher blends for some cars by early-to-mid October, in line with a target that the agency gave several months ago. Industry officials expect the EPA’s decision will allow for E15 to be marketed and sold to owners of 2007 and later model cars.

So, what are the automakers saying? In May, the Auto Alliance, along with the American Petroleum Institute and the Outdoor Power Equipment Institute, requested the EPA to delay action on the E15 waiver until next year because their own testing hasn’t been completed. The groups did recommend that the government should instead implement blends of E11 or E12 for “smoother implementation on the way to higher blend levels.”

In addition to government funding, the auto and oil industries said they have spent more than $6 million during the last two years testing engine performance and durability using E15 fuels. “Testing for engine and vehicle compatibility and environmental issues is scheduled for completion in 2011,” said Coleman Jones, biofuel implementation manager for General Motors.

“There’s no need for precipitous action when the scientific results are so close at hand.”

If the E15 fuel is proven to be detrimental to the fuel system components of older vehicles, it could impact your shop by creating an increase of service and repair orders. It may even lead to retrofitting fuel systems with new components that can handle the higher ethanol content of E15 fuel.

We would like to hear what you think on this issue. E-mail us your comments to [email protected]